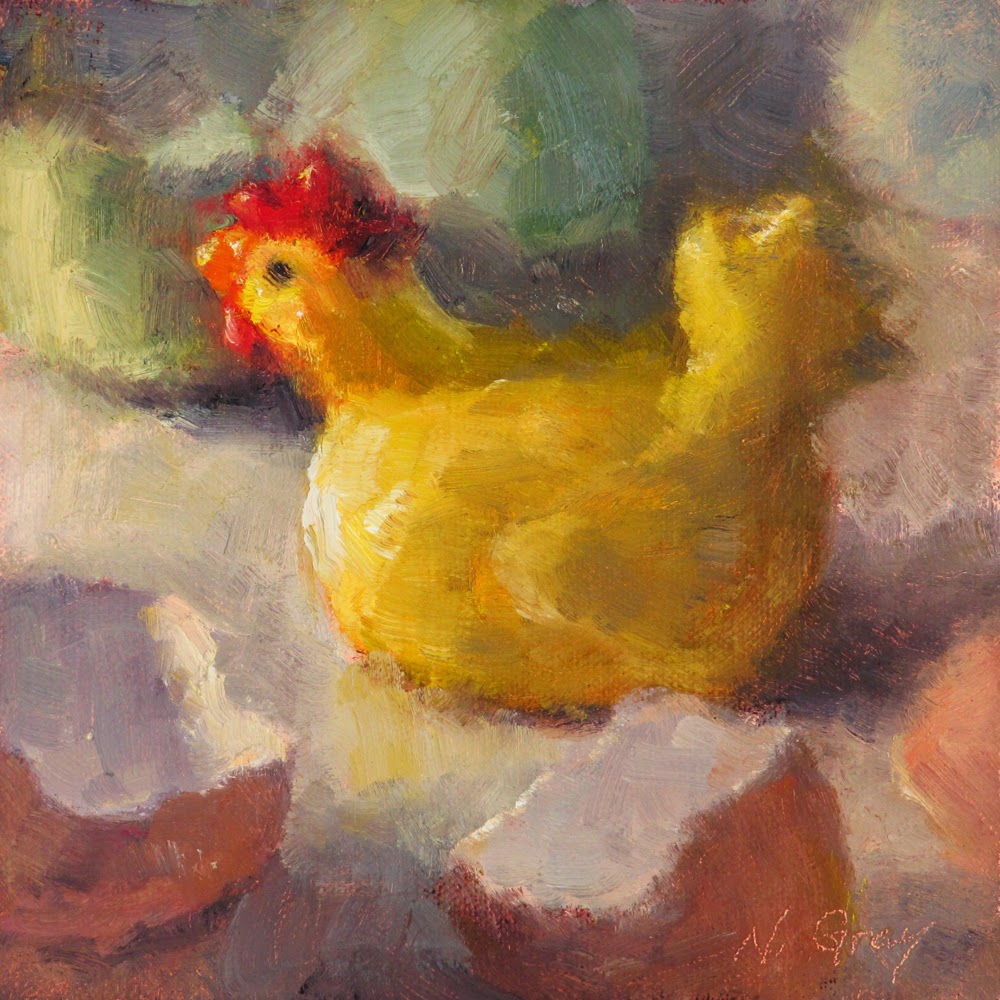 The Traveling Chicken and the flock are here in Ellensburg (the central Washington), the home of our happy pet chickens. We have nine hens and a rooster. They all have names, and I paint them often.

My husband and I love alpine skiing. We went to 49 Degrees North Mountain Resort, north of Spokane, last week. I enjoyed skiing on the fresh powder and bumps on my brand new custom designed powder skis. I was inspired by the those bumps on the slope, and came up with the idea to use eggshells to suggest the bumps. Our chickens lay colorful eggs hence colorful bumps. I wanted to make these ceramic chickens look like skiers. But I decided not to put them on the fake skis for this piece.

I initially set up this still life stage for Ms Chicken and Senor Gallo walking side by side. But I didn't think it would make a compelling composition. It looked too busy among eggshells. So I removed Gallo, and focused on just Ms Chick this time. I felt sorry for Gallo for not being included in the scene. But Ms Chick know what she wants. She is not walking on eggshells, she's actually walking around them. Independent chicken. She knows that Gallo will be fine. 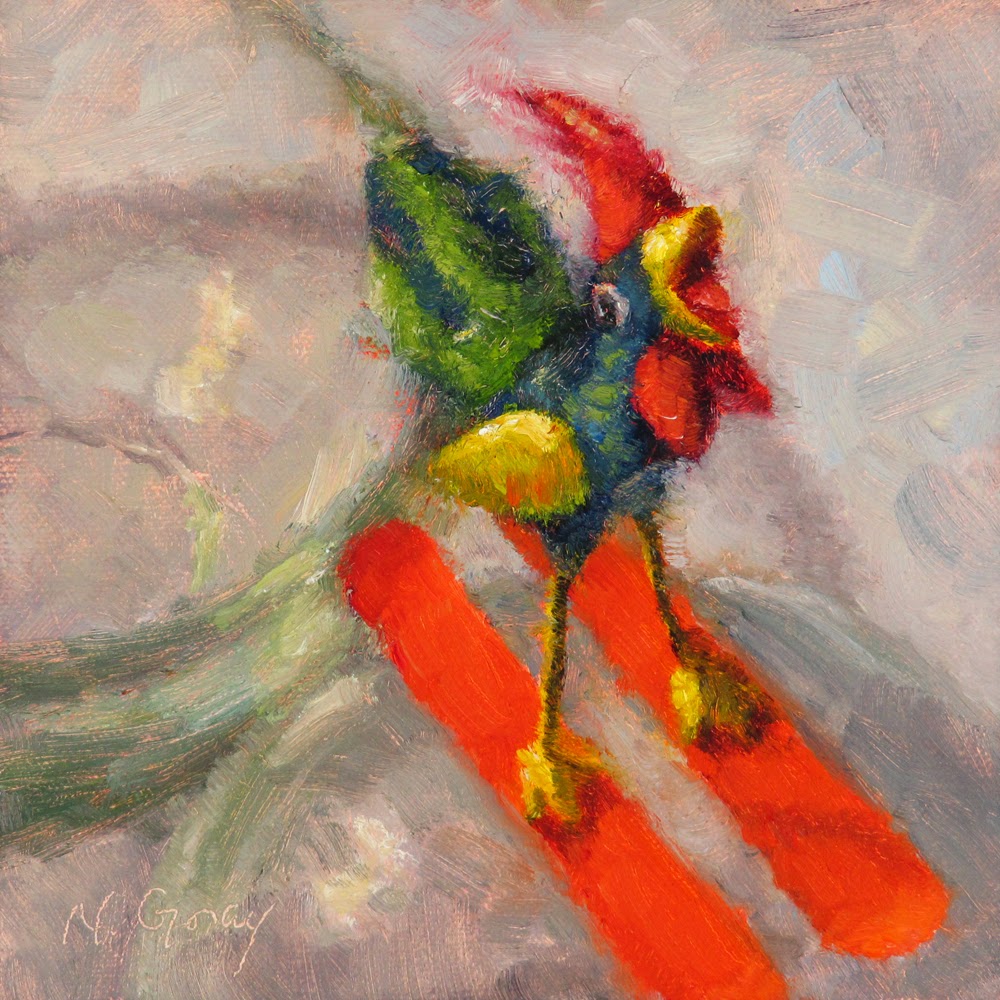 This is the second painting of the Traveling Chicken series. In the previous episode, Valentine's Day for Mr Gallo was a disaster. Gallo developed feeling for Ms Chick, but he realized that Ms Chick did not feel the same way for him. Ms Chick knows what she wants, and Gallo is not part of her vision. So, instead of staying depressed, Gallo decided to take alpine ski lessons while visiting the Northwestern United States. Then he recently got a new pair of wide skis for powder! He enjoyed cruising down the steep and deep powder slopes all day long today. I wanted to convey his excitement. To recreate this scene in my still shadow box, I cut out skis from cardboard, and drew them under his feet on canvas. To suggest ski tracks and bumps on the snow, I used two glass bowls: one upside-down to place the figure, and the other one right-side up next behind the figure. I liked the transparent and subdued background to offset the vivid shapes of rooster and skis. 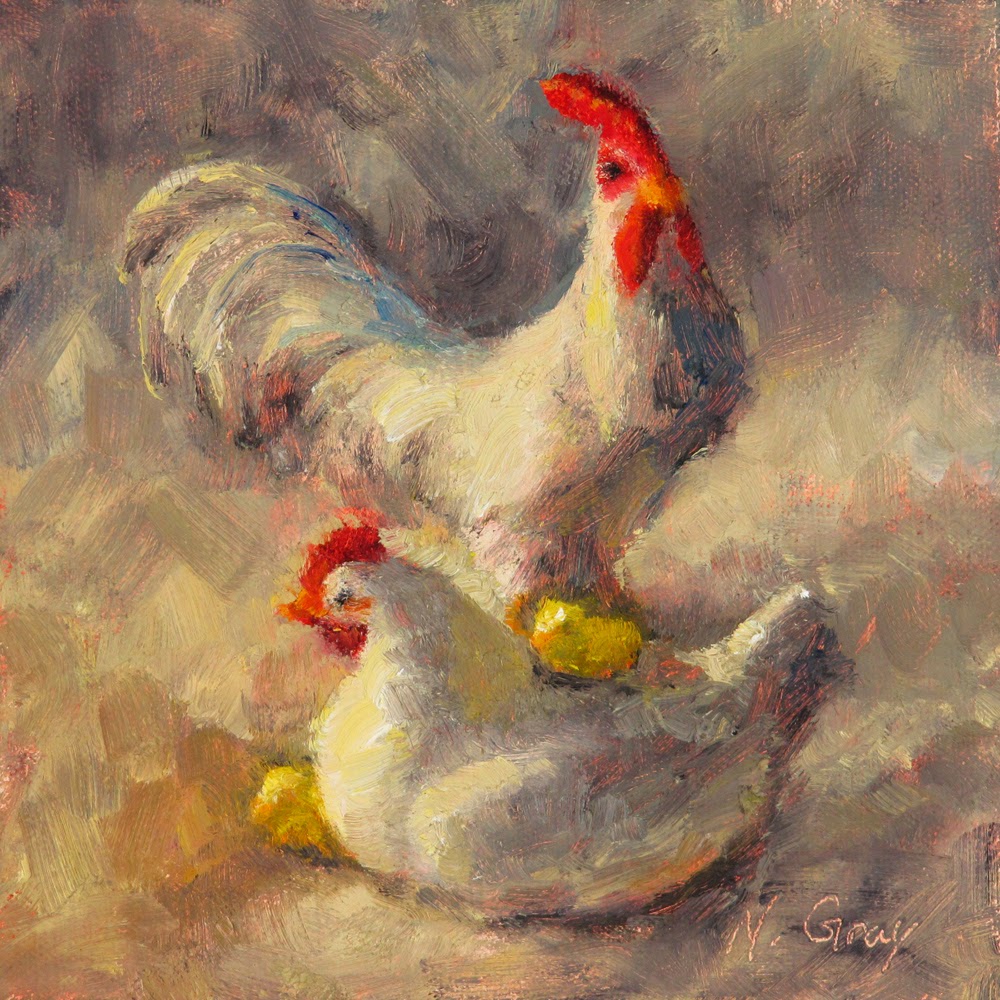 While the TC crew enjoy a stay in the central Washington, Ms. Bianca met a Japanese Rooster, Haku (means "white" in Japanese). Haku is a plastic figure I have in my studio. They fell in love at first sight. Bianca requested an extension of her visit. Now they have a couple of baby chicks. Unfortunately, it is time for the Traveling Chicken crew to leave for Indiana, the next destination. She's going to take the baby chicks with her. She asked Haku to come with her, but he said that he needed more time to straighten things out with Ms. Duck, his current partner. Ms. Duck is another miniature figure in my studio for painting reference. Haku and Duck have been together for several years.

For this painting, I originally planned to take a photo of the still life setup, and paint from the photo, so that I could ship the TC package sooner. I also thought it would be easier to see the tiny subjects if I see the closeup photo on my tablet next to the easel. But I figured that it would be harder to paint because the color and value are so distorted in a photo. I love the subtle glow of warm yellow reflected from the baby chicks.

Haku and Bianka with the chicks enjoyed posing in the shadow box in my studio all day yesterday. The TC crew are now off to visit Connie Nobbe in Indiana. Thanks TC for visiting us!