This morning I awoke to calm and quiet. A little too calm and too quiet. Going to make my early morning cup of coffee ( I don't function too well without it!), the traveling crew were nowhere to be seen.

I put on my best deerstalker hat and went searching. Nobody on the back patio. No one in the bottom garden. As I crept round the side of the house, there they were sunning themselves on the sunlounger. They had taken a sneaky early morning swim. As Senor Azul explained:

"We awoke as the cock crowed and as everyone else was still asleep, went for a dip to cool off after the warm night." 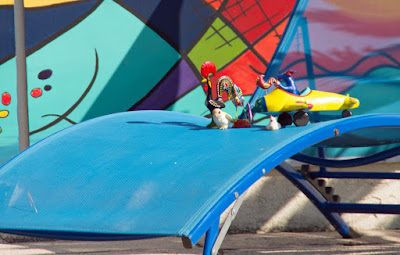 After breakfasting on the balcony, the crew got ready to leave. After a teary goodbye, they climbed aboard and went off to the next leg of their journey in Brittany. 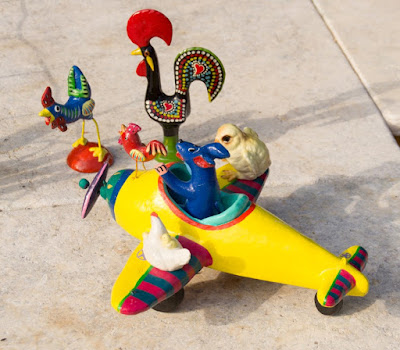 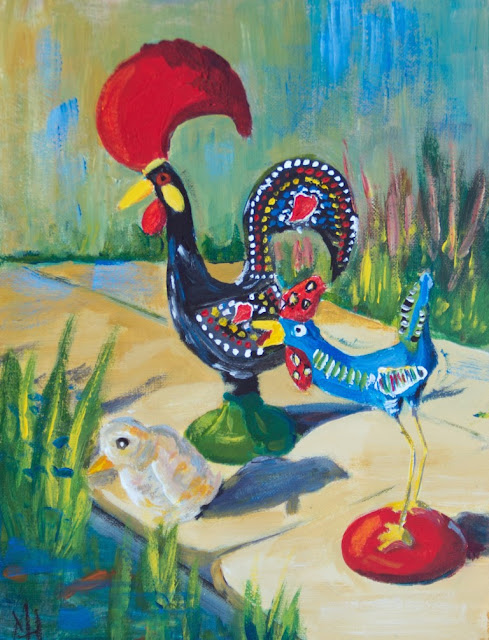 Keep Away from the Edge
7x10
acrylic on canvas panel

Posted by Artbymarion at 12:07 PM 2 comments: Links to this post

Traveling Chickens land in South of France by Marion Hedger

Guess who flew in today to visit me, Marion Hedger in the South of France? Senor Azul and friends. They arrived in a specially chartered jet all the way from America. I was so happy to see them but I was horrified to learn there had been a mishap on the journey and the pilot broke his arm as the plane skidded in to land. The skid also resulted in some propeller damage. 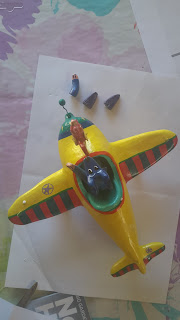 The pilot immediately went into intensive care and the plane to the mechanics workshop.

While the pilot was getting some tender loving care, the chickens went out to stretch their legs in the garden. They were so happy playing around in the sunshine with squawking coming from all around.

I found Senor Azul in the lemon tree choosing the ripest lemon for his gin and tonic. 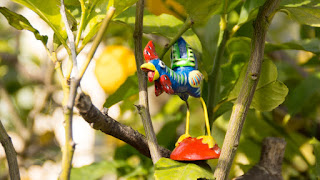 Having chosen his lemon he hopped down and joined the other on top of the Moa statue. It was a long way down so I encourage them down with some tasting bird food. 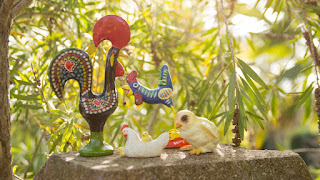 After lunch, the recovered pilot returned in his fixed plane.

There were cheers all round and to celebrate they went for a spin in the plane around the garden weaving in and out of the trees. They went around the house a few times to investigate the back patio area.

All of a sudden I heard a loud squawking and rushed around to find out what it was all about. Baby chick had taken a liking to the fish and was thinking about joining them for a swim in the pond. Well... Senor Azul was behaving like a Mother hen while Alphonse was standing there all aloof. 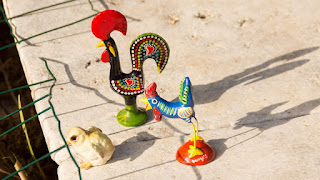 I saved the day by taking them all indoors and settling them down with Martha and baby Maud. 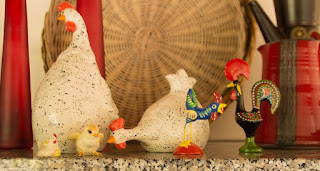 Adventure to be continued...


Posted by Artbymarion at 11:22 AM 4 comments: Links to this post