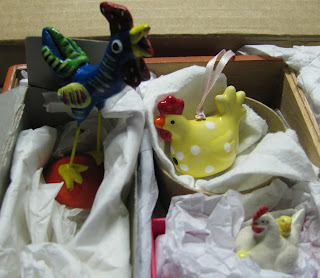 When TC and her entourage arrived at my home at the beginning of this week, I opened the box & package up like it was a present! How wonderful all of you artists were with packing her & giving her such safe quarters!

When I opened the inner box, TC popped out & immediately wanted to know where she was going next (she is really such a jet-setter!). She said she loved visiting with Cathleen, but was ready for the next place and was anxious to know where.

I had contacted the next artist on the list, Karen in Oregon, but she had travel plans & would not be available til after July. Then I noticed the next 4 artists were overseas. So I asked TC - would she like a trip abroad? She was ecstatic! Mr. Gallo Azul (her rooster friend) immediately began to crow, while momma chick simply clucked with delight. TC said she hadn't been abroad since she visited Anita in India & Evie in the UK!

I put together a list of oversea's artists that were on the waiting list and who had time this summer for the project. The artists & travels are (in order):

This morning she left for France - she was so excited I could barely get her to sit still in the box! I told them to be quiet as we entered the Post Office. I didn't need the rooster crowing - for sure the International clerk would have raised an eyebrow! But all went well & they are on their way.

After Greece, TC will probably return to the US, where she will catch up with some of the US artists. She will, no doubt, do a Canadian voyage also, sometime in the not too distant future!

Hopefully non of the artists on the waiting list are too disappointed, as I know this will change the waiting list order a bit. When the time came for an overseas shipment, I thought it best to combine as many as I could - limiting the trans-atlantic crossings. Hopefully TC & her entourage will survive all their travels.

I look forward to seeing the art & stories! TC will be visiting some interesting places and I know she will enjoy meeting everyone!

I will be updating the Facebook page with each artists entry, along with a link back to the artists blog. Right now I have Azra's initial post, and plan to add each artists post in order of hosting. This is a great way to expand the audience of TC, plus get the assorted artists names, blogs & websites out there.

So head on over & check it out. And be sure to LIKE the page!! And SHARE, so others can find out about TC, her entourage, and us!

Silly Chickens - Go Around the Globe


I signed up to participate in the adventures of the traveling chicken, they arrived a few days ago to my house, and here they are! I will be sending them off to the next lucky artist… someone recently asked me if I ever paint "silly" things. I think these chickens definitely qualify as silly!