Well, it certainly has been an eventful couple of days for TC, Señor Azul, Stuart and Red the Squirrel.

It all started yesterday morning (July 1) when TC suggested to celebrate Canada’s 150th birthday (known as 'Canada Day'), she’d love to go on a big cat safari.  Señor Azul and Red the Squirrel agreed this would be a delightful idea.  Stuart, who can be a little timid – especially when it comes to cats - wasn’t sure about this idea, but went along all the same.

Upon arriving at the cat safari, the gang was in awe of the animals.  In addition to several big cats, there was also a stunning beaglesaurus (a very rare and docile species).

The visit started off well enough, but quickly took a turn of the worse.  A big orange cat took notice of Stuart’s tale, and mistaking it for a rope toy, sprung forward to attack.   As this happened, the cat noticed the rest of Stuart’s friends and became very curious.  He stalked around them, sniffing each one.  TC, Señor Azul, Red the Squirrel, and Stuart stood frozen, not even daring to breath.  They prayed the big orange cat would lose interest soon.  As time passed, it seemed evident that this was not the case.

Stuart decided he had to act.  He took a deep breath, dug down deep to find all his courage, and spun around to face the big orange cat.   As he looked him straight in the eye, he stammered “Back off Cat!!”.  To everyone’s surprise, the big orange jumped with a startle.

“You’re alive?!!? I thought you were inanimate cat toys.  Oh dear, oh dear!  I don’t even want to think about what could have happened if you didn’t speak up”.

TC, Senor Azul, Red the Squirrel, and Stuart stood there in silence – taking in what the cat had just said.  TC went on to clarify, “so you don’t want to eat us?”.

“Eat you?? Of course not!  We are friendly cats here.  Come, sit, visit.  Tell me all about yourselves.”  And with that, TC, Señor Azul, Red the Squirrel, and Stuart sat down and had a lovely chat with the orange cat (who's name turned out to be Stanley).  TC and Señor Azul recounted many of their tales from their various international adventures.

The rest of Canada Day was very calm and relaxing.  They visited some garden centres, played cards, got a coffee from Tim Hortons, and then finally sat for their portrait.  Red the Squirrel was quite tired and insisted he needed a nap (as such – he didn’t make it into the portrait). 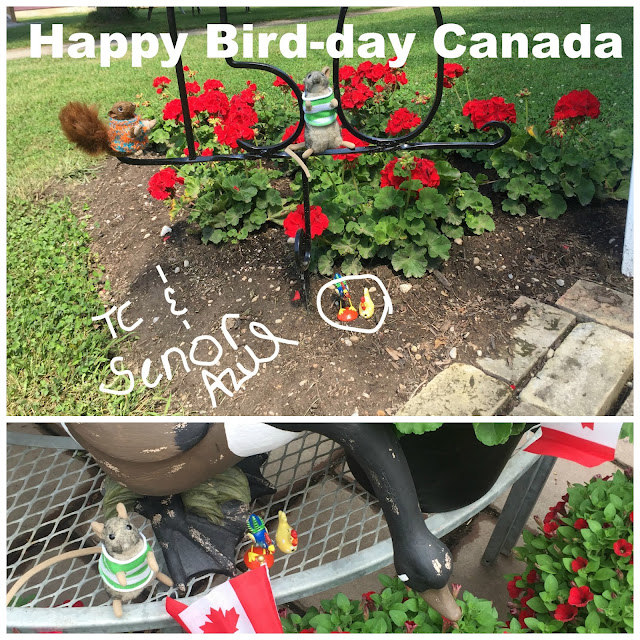 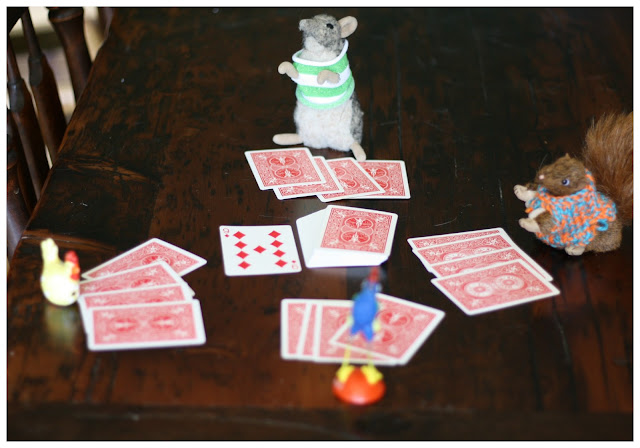 Here is the portrait:

Anyway - TC and Señor are flying out soon...on their way to their next adventure.   Let's all wish them luck on their travels!
Posted by Unknown at 12:06 PM